In UNDISPUTED, world heavyweight champion 'Iceman' (Ving Rhames) is convicted of rape and sent to a maximum security prison. Monroe (Wesley Snipes), a former heavyweight contender, is the undefeated champion in the inter-prison division. They fight each other. That isn't a summary of the movie – that is the movie. There is some flash and attitude, but it is all on the surface. The boxers fight in a cage rimmed with barbed wire. That makes for some cool shots through the swirls, but it doesn't make any sense.

There's also an escape risk in the middle of a boxing match with all the guards standing there watching. There is more plot and character development in Michael Jackson's music video for 'Beat It' than in this forgettable prison boxing movie.

Sports movies (and prison movies, and, come to think of it, most movies) work well when there's a metaphorical journey involving risk, learning, sacrifice and growth. There's none of that here. Iceman and Monroe are unchanged from beginning to end. We hear that Iceman is a strong offensive boxer, so we expect to see Monroe develop a strategy to put him on the defense. Monroe says that he has learned to live entirely inside himself, rely only on himself, and stay in control at all times, so we expect to see him have to rely on himself. Some big deal is made about having the big fight according to the old rules from the bare-knuckle days, but then the guy organizing the fight changes his mind and decides they will use gloves. Except for one guy who dies, everyone ends up pretty much where they started. 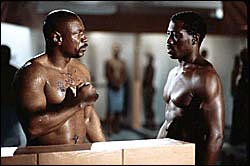 All that's left, then, is the boxing. There are some powerful moments, but they, too, are flash without substance, and show no real understanding of the sport.